Child Law Webinar Series No. 5: Access to Justice for All Children 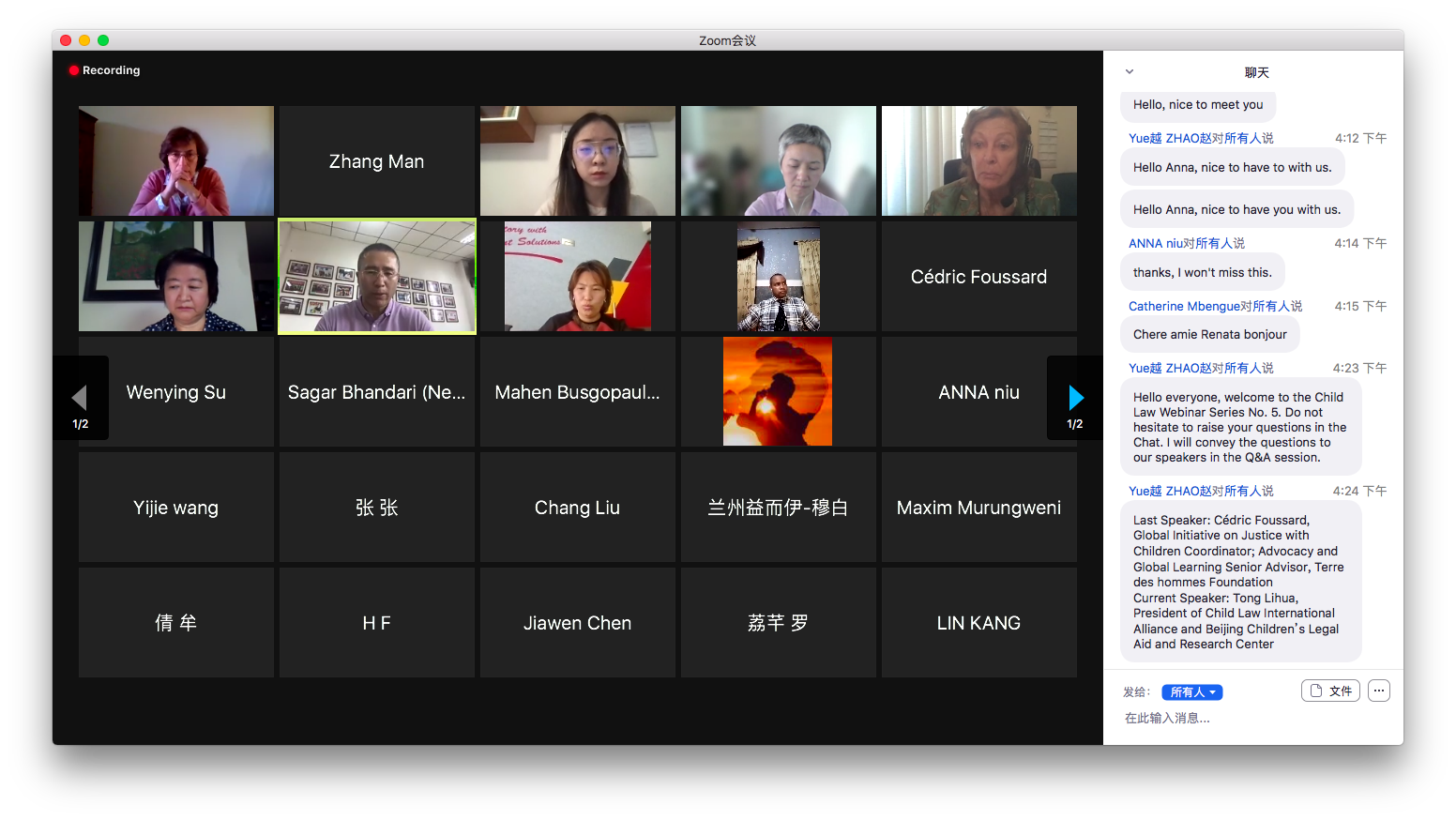 Access to Justice for All Children: Towards Non-discriminatory and Inclusive Child Justice System

Child Law International Alliance and Beijing Children’s Legal Aid and Research Center held the fifth Child Law Webinar on May 20, with the support from UNICEF China and the participation of the Global Initiative on Justice with Children. Eight experts from the United Nations, Terre des hommes Foundation, California State University, and other institutions discussed non-discriminatory and inclusive child justice systems with audiences from 23 countries.

The webinar was moderated by Ms. Su Wenying from UNICEF China. She briefly introduced the speakers and invited them to elaborate on their views on children’s access to justice.

Najat Maalla, Special Representative of the United Nations Secretary-General on Violence against Children, shared four key messages with the audiences, which are as follows:

Mr. Cédric Foussard, coordinator of the Global Initiative on Justice with Children and the Advocacy and Global Learning Senior Advisor for Terre des hommes Foundation, delivered a welcome speech and introduced his work on access to justice for all children. He elaborated that Global Initiative on Justice for Children has been organizing the World Congress on Justice for Children. Mr. Foussard noted that, under the auspices of the Global Initiative on Justice with children, 14 preparatory meetings had been held around the globe, including regional meetings in North America, Latin America, Europe, Middle East and North Africa, and national meetings in the US, Pakistan, Thailand and China. He said the concept and the topic of non-discriminatory and equal access to justice for all children are the priority worldwide.

Mr. Tong Lihua, President of Child Law International Alliance (CLIA) and Beijing Children’s Legal Aid and Research Center (BCLARC), welcomed the participants to the fifth meeting of the Child Right Webinar Series and gave his thanks for all the speakers’ contributions. He emphasized the importance of law and legal reform in the protection of children and the practical relevance of communication and knowledge sharing among legal professionals from different countries. Mr. Tong introduced BCLARC’s work in China and on the international level for promoting child protection. On the national level, he and his team participated in the whole process of the revision of the Law of the PRC on the Protection of Minors, including providing expert opinions for the National People’s Congress. On the international scale, BCLARC organized the Global Social Leadership Summit on Child Advocacy with professionals from 20 countries, especially from developing countries in 2018, and held the Global Child Protection Seminar with the participation of experts from 18 countries in 2019. Mr. Tong announced that, given the success of these activities, BCLARC and CLIA had initiated the Global Child Law Fellowship to sponsor legal professionals to advocate for child law legislation and welcomed eligible candidates to apply for this Fellowship.

Mr. Tong continued to elaborate on three issues concerning children’s access to justice. First, he introduced the recent amendments to two China’s laws concerning minors, namely, the Law on the Protection of Minors, which was adopted in 1991 and underwent a major revision last year, and the Law on the Prevention of Juvenile Delinquency, which was adopted in 1999 and revised in 2020. Second, he elaborated on the change of the legal age of criminal responsibility in China and the newly introduced correctional mechanism for juvenile offenders. He said Chinese law has strict standards for criminal responsibility of minors, and the number of cases prosecuted each year is limited. The age of criminal liability in China is 16, and children between 14 and 16 are criminally responsible for 8 types of serious crimes, including intentional homicide, robbery, drug trafficking and others. Nevertheless, recent years have observed a growing concern about the threat of crimes committed by younger people in China. As a result, last year China lowered the age of criminal responsibility for the most serious crimes to 12 years old with three strict criteria. Mr. Tong commented that after this revision, the prosecution of minors is still subject to stringent restrictions. Last, Mr. Tong talked about recent government work on the prevention and correction of juvenile crimes in China concerning the implementation of the revised Law on the Protection of Minors. In March, an office that promotes the work of juvenile courts across the nation was set up at the Supreme People’s Court to unify the standards of juvenile case hearings and enhance the rule of law in this regard. In April, the State Council, China’s Cabinet, set up a high-level leading group to coordinate work related to the protection of minors among government departments as well as judicial and other bodies. To summarize, Mr. Tong put great emphasis on international cooperation and welcomed speakers to share their views on the practices in other jurisdictions.

The next speaker, Renate Winter, the former President of the Committee on the Rights of the Child of the United Nations, shared her views on children’s rights in justice systems. She is the Justice of the Residual Court of Sierra Leone.

Ms. Winter first noted that the meaning of guilt, and the fact of being guilty, is a prerequisite for sentencing and for getting in touch with the justice system. She continued to discuss the minimum age of criminal responsibility and explained that there are two groups of member states of the Convention on the Rights of the Child: one has established a fixed minimum age of criminal responsibility, and the other one has no such system but leaves it to judges and experts to find out if a child could be criminally liable. For the appropriate age of criminal responsibility, she elaborated that the maturity of individuals shall be taken into consideration. Ms. Winter said that, although children’s physical maturity differs in quite a lot of countries, taking a little longer in the North, while developing more quickly in the South, concerning brain development, we have the same situation everywhere. She said that the brain develops until the age of 20-21, but below the age of 12—14, a child is not capable to have a sound knowledge about the consequences of their behavior. She noted that one should also consider child victims and witnesses in front of the justice system, albeit not as accused persons. She stressed the importance of Article 23 of the General Comment 24, by which the Committee had recognized that although the setting of a minimum age of criminal responsibility at a reasonably high level is important, an effective approach also depends on how each state deals with children above and below that age.

“Children below the minimum age of criminal responsibility should be provided with assistance and services according to their needs by the appropriate authorities and should not be viewed as children who have committed criminal offenses,” she said, adding that education and correction in closed environments could be damaging to children. In summary, Ms. Winter emphasized that children in conflict with the law who are under the age of criminal responsibility should not be treated as criminals and should be heard when assistance is given to them.

Ren Xin, Professor of Criminal Justice at the California State University, Sacramento, USA, introduced how the justice system works for children in the United States and hot issues discussed in the academic field. She emphasized the difference between equal justice and equitable justice, saying that it seems to be a consensus among many policymakers and academic researchers that equitable justice is more important than equal justice. She said that equal access to justice is protected by the law, especially by the 14th Amendment. Still, equitable justice also includes the new conceptualization, especially for marginalized children and children in disadvantaged status, and equal justice sometimes is not sufficient for them, and sometimes may not even reach those children. She concluded that equitable justice seems to be more appropriate to address those children’s needs.

What will be the best for protecting children’s interests? Professor Ren said that there is an important issue to be considered: punishment is not always the answer. “Even if we see that the child is a delinquent in criminal justice system, at the same time, we have to trace back what happened in the family,” she said; it means, whether there was a history of victimization and criminality when the child was a dependent. “They’re not isolated. Very often, this individual, this individual child, may be neglected and sometimes even abandoned by their parents. And because of that mistreatment by the family and others, a child may wander up on the street or be recruited by a gang member,” she said. As an educator, Professor Ren has done research on violence against children and women. She emphasized that there is a close connection between victimization and individual offenders. Many juvenile offenders had a child sexual abuse or physical abuse experience at home, neighborhood and school. Therefore, close attention should be paid to those juvenile offenders’ past victimization experiences. What will be the best treatment for that individual offender? Simply punish them? She said that it is not the solution and it’s not going to solve all the problems.

Jiang Min, Project Manager of the Child Friendly Justice program at Save the Children China, introduced her work in child justice. Her work started from a juvenile justice for children in conflict with the law and extended to provide help to children as victims or as dependents as a guidance institute. Her work has turned from traditional juvenile justice to child-friendly justice for all children. Ms. Jiang elaborated on the pilot-working Panlong District One-Stop Center aimed to protect Children from secondary harm in and beyond judicial proceedings by giving a case of a sexually abused girl. She noted that the Center constituted a “one-stop center” for the interview of children, including the questioning by police officers, prosecutors and the participation of a doctor, a psychological consultant, a child protection social worker, etc. Ms. Jiang discussed in detail the interview process in this one-stop center and emphasized that it is not limited to sexually abused children but is also aimed to children who experienced other serious violence. This center also contributes to the social governance and social-rooted courses for the prevention of violence against children. She noted that the newly revised Law on the Protection of Minors, which is implemented in June, includes special articles for particular groups of children and requires specialized personnel and agency for children’s cases, including children as offenders and children as victims. This law lays the basis for protecting all children. Ms. Jiang emphasized that there are still lessons to learn, including, for example, capacity building for police, social workers and other service providers. In summary, she concluded that one-time intervention services and balance parenting serve children’s rights and best interests.

Underlying these strategies, Ms. Calder concluded that the fundamental requirement is that children of all ages who offend are assessed by professionals using sophisticated risk tools and professional know-how. She said that children should be dealt with in light of their maturity level, socioeconomic background, culture, and needs. Ms. Calder stressed that for most children who offend, their best interests and welfare are in community interventions. She added that special emphasis should be put on using twin interventions of protection and education because there is plenty of evidence to show that low MACRs and punitive approaches are much less likely to change a child’s behavior. She noted, by citing Barrister Laura Janes of the Howard League for Penal Reform, a UK-based campaigning charity, that “the lower the age of criminal responsibility, the larger the juvenile prison population.” Ms. Calder quoted from a report as her closing remark: “there are better ways to deal with children and young people than criminalizing them; criminalizing young children affects their futures and puts the brakes on them becoming responsible members of their communities and societies; let individual assessment programs, well-resourced and implemented to serve the best interests of the child, be our aim and practice.”