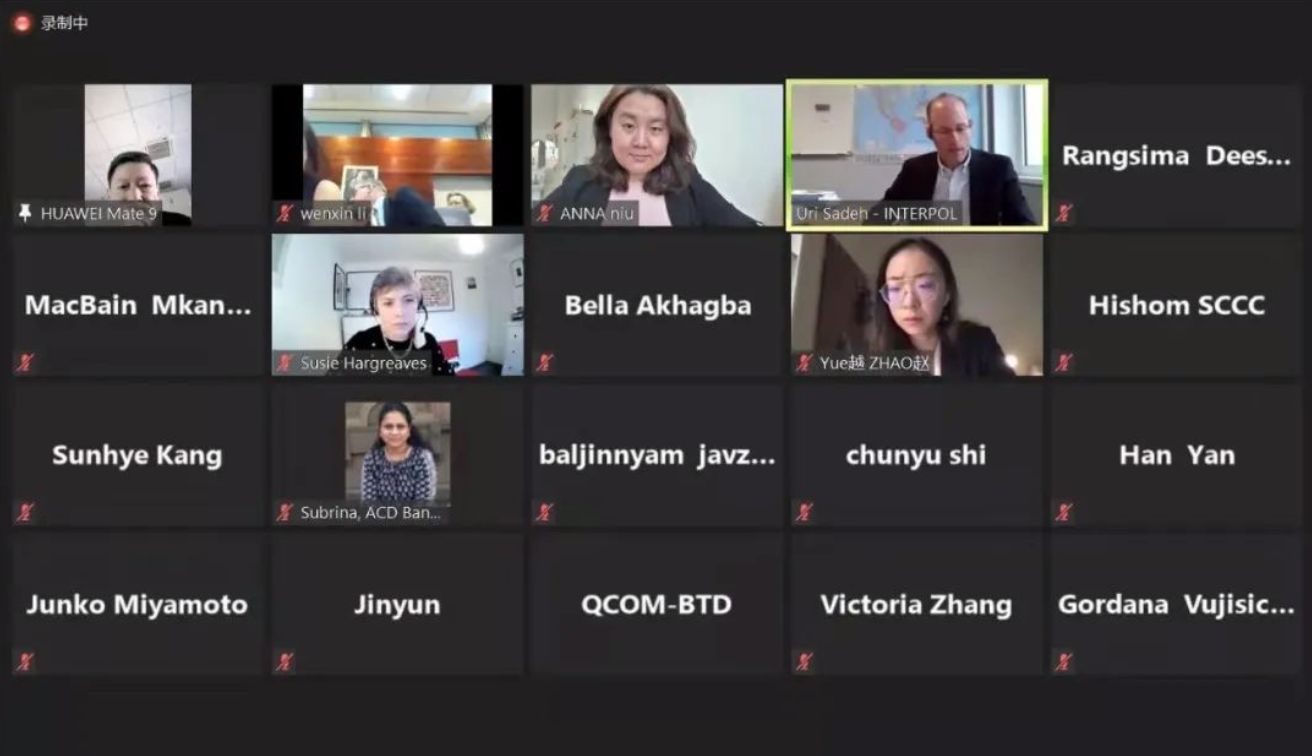 “Digital development has increased the difficulty of tackling CSEAM,” said Mr Lihua Tong, director of the CLIA. Ms Rangsima Deesawade from ECPAT International concurred with his view, emphasising that online CSEAM “is an international concern that goes beyond boundaries.” Their welcome address revealed the increasing challenges of eliminating CSEAM in the digital environment.

Mr Xiaoming Zhang, Deputy Director-General of International Cooperation Department of Ministry of Justice of China, first expressed his gratitude for being invited to the conference. He pointed out that preventing and combating crimes against children should be a universal concern and consensus of the international community. And international cooperation should be established in five aspects:

Based on his abundant experience in international criminal justice practice, he argued that international cooperation in this field should be enhanced at three points:

Concluding his speech, Mr Zhang called on governments and relevant international organisations to:

Ms Shuaishuai Niu from BCLARC kicked off the discussion by clarifying terminologies. She argued the child pornography, child prostitute, and child sex worker were not appropriate terms, as they could imply the child’s consent to these acts or shift blame on the child.

As a child rights lawyer in China, Ms Niu also elaborated on Chinese legislations concerning CSEAM, mainly the Criminal Law of PRC, Law of the PRC on the Protection of Minors, and relevant judicial interpretations and regulation. In detail, Article 367 of Criminal Law of PRC defines pornographic materials as obscene books, periodicals, movies, video-and audio-tapes, pictures, etc., that explicitly depict sexual behaviours or undisguisedly publicise pornographic materials. Relevant crimes include, for example, production, duplication, publication, selling and distribution of pornographic materials. the Criminal Law does not criminalise possession of CSEAM. She examined Chinese law on CSEAM with the five criteria of model legislation put forward by ICMEC in Child Sexual Abuse Material: Model Legislation & Global Review and noted: “Child pornography is covered by China’s criminal legislation and relevant crimes are subject to severe punishment. However, there is no separate law or definition exclusively on child pornography, except for the Judicial Interpretation.”

Ms Niu also reviewed the latest revisions to the Law on the Protection of Minors of the PRC. In particular, this revised law expressly prohibits “possession” of CSEAM in Article 52. Article 80 provides for Internet Service Providers’ duties to promptly remove content detrimental to children’s physical and mental health, including the CSEAM, keep the relevant record and report to the police. She considered these revisions as a praiseworthy move.

Ms Susie Hargreaves, chief executive of the Internet Watch Foundation (IWF), introduced the IWF’s services and mechanisms for reporting and removing CSEAM. She told attendees that IWF’s main services include providing updated URL blocking lists consisting of the webpages containing child sexual abuse content host inside and outside the UK. Through the mechanism of “Notice and Takedown”, IWF send immediate alerts to the UK host of illegal content and required removal in 2 hours. On the global scale, IWF holds 43 international reporting portals, of which 22 are in Africa, and cooperates with NCMEC, INHOPE and INTERPOL in removing child abuse images. She noted that IWF’s another service was hashed list. IWF shares hashes with the internet industry to prevent individuals from upload images that were already identified as sexual abuse images.

Ms Hargreaves ended her speech with a brief introduction to IWF’s staff and the welfare system supporting their work.

Mr Uri Sadeh, Coordinator of INTERPOL Crimes against Children Unit, introduced this Unit’s work of victim identification. The centrepiece of the victim identification work is INTERPOL’S International Child Sexual Exploitation (ICSE) database, which currently documents nearly 25,000 victims and connected 64 countries. The ICSE database allows hands-on investors from different jurisdictions to share information and work jointly. “we want to avoid the situation where officers reinvestigate a case that their colleagues in a different country have already sold,” Mr Sadech said, “We want them to focus on material still unidentified.” Keeping pace with technical development, the Crimes against Children Unit coordinates practitioners from academia, industries and the law enforcement domain to create innovative solutions for crime investigations. Concluding his speech, Mr Sadeh stressed that cooperation with China is very welcomed, and he was glad that the webinar invites Mr Zhang from the Chinese law enforcement agency.

The next two speakers focused on the US legislation and practice. Mr Richard Daynes works as a Resident Legal Advisor at the US Department of Justice. His speech was centred on the US federal statutes on child exploitation. He reviewed the CSEAM-related crimes defined therein, including but not limited to production, distribution, reception, and possession of an image of child pornography, obscene visual depictions of children and transfer of obscene materials to a minor. He also introduced that convicted offenders of some child pornography crimes face statutory minimum 5 or 10 years in prison up to life imprisonment. For example, a first-time offender convicted of transporting child pornography faces in interstate or foreign commerce faces a statutory minimum of 5 years, and an offender of distributing child pornography faces a minimum of 15 years.

Ms June Liu is a US Homeland Security Investigations (HSI) special agent. She is currently involved in Operation Test Pilot, an investigation utilising various techniques along with usual ways to infiltrate child pornography sites. Ms Liu brought insights into real cases. In 2014, HSI discovered multiple forms of advertising, offering and exchanging child pornography in darknet. In 2016, HIS office in Beijing began to work jointly with the Cybersecurity Department of the Ministry of Public Security of China (MPS) and arrested two Chinese offenders of child pornography. In November 2016, HSI and MPS Cybersecurity Department presented cases to the INTERPOL specialist group on crimes against children at its 34th Meeting. These actions facilitated information sharing between MPS, HIS and INTERPOL.

The last speaker, Ms Sunhye Kang, a contributing activist at TACTEEN/ECPAT Korea, focused on the Nth Room Case and the legislative changes in South Korea thereafter. The Nth room case was a criminal case where the perpetrators abused the private information of victims and forced them to produce sexual exploitation material. It was uncovered in early 2020. The victims were mostly women, including teenagers and girls. The offenders used private chat rooms on Telegram to distribute sexual exploitation images. After the report of the Nth room case, over 5 million people signed the national petition to request the government to disclose the offenders’ information and impose punishment. This action triggered revision to the law, mainly the Nth Room Prevent Act, which raised the maximum term of penalty for producing and circulating sexually exploitative videos from 5 years to 7 years and punished possession of CSEAM. The existing statutory laws concerning CSEAM are also revised: